Client: LUBRIK CONSTRUCTION
The project consists of a 20 meter long, single span, simply supported bridge.  The bridge is shown in Figure 1.  The bridge deck is made out of reinforced concrete I beams laid on top of the end abutments, and connected on the top by a reinforced concrete slab. Because the substratum consists of thick soft organic clay, the backfilling of the Abutments caused very large displacements.  Also the initial bridge construction methods seem to be of poor quality.  The bridge condition, damages, and ways to repair it and put it in service are all discussed in this report.  This report is preliminary in nature, based on site visit exploration and the suggested recommendations are conceptual and should be used for guidance only until the complete analyses and design of the existing bridge has been done at a later stage. 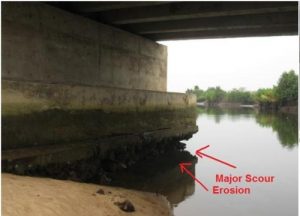 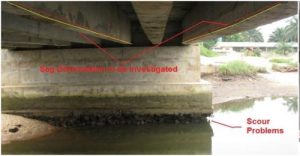