The Project is in Achrafieh area in Beirut Lebanon. It consists of an old residential building that was acquired by and engulfed by the AUST campus (American University of Science & Technology). Int’l IGM task was to evaluate the existing structure, & intervene according to a design/build contract for a somewhat surgical intervention for strengthening the existing structure in order to accommodate the new usage as classrooms. The study was directed towards allowing a sizeable increase in live load capacity to reach school load standards (450 kg/m2). The tasks of Int’l IGM are described in the following sequence: 1- Analyze the Load distribution, 2- Test the concrete quality & steel reinforcement,  3- Strengthen any structural element that is found unsatisfactory using CFRP technology,  4- Structural strengthening by creating new vertical and flexural elements, 5- Strengthen the foundation system by underpinning with micropiles. 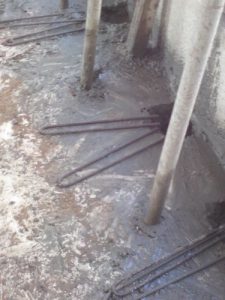