The old Hilton Hotel in the BCD is now doomed to be demolished to make room for a new project. The demolishing operation was to be done by implosion of the 26 storey tower + the 3 existing basements. The lot is surrounded by major roads and infrastructure, and by the Kanafani building from the West side. The topsoil layer (about 5m deep) consists of a sandy clay fill material, then the clay becomes interbedded with a hard cemented marl and limestone layer down to 15m. The demolition requires that the basement walls be utilized as temporary shoring before, during and after demolition. I.G.M. designed and constructed special anchors capable of supporting the dynamic loads during the explosion, and the static load after. The anchor heads and blocks were also specially fabricated by IGM to take the impact load without release of tension in the anchor strands. The anchors were tensioned and tested against the existing basement walls that were checked for structural integrity also 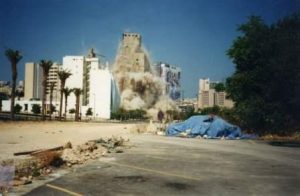 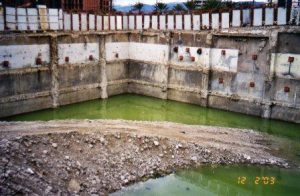 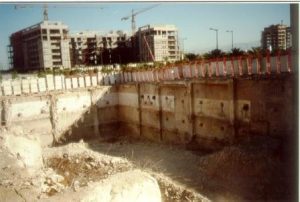