The HITACHI Building consists of a commercial center on the main highway in Bauchrieh. Empty plots surround the site, which minimizes the needs for shoring works. Exception is made towards the main highway side were excavating about 12m in depth was planned. The client prior to IGM’s arrival excavated with some inclination the top 6m which were cohesive and stable. The Soil was Sandy Clay with the water table at a depth of 9m. The bottom of excavation was planned at 12 meters (3m. below water). I.G.M. proposed an anchor/pile system consisting of 60cm concrete piles each 9m long (-6 to –15m) and spaced 70cm c/c, with 1 row of high strength anchors spaced 2.1m. The piles were exposed 6m after excavation and had to retain 6m of sandy soil on top (surcharge). The anchors were tensioned against a rigid cap beam connecting all piles 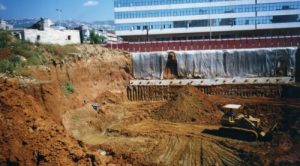 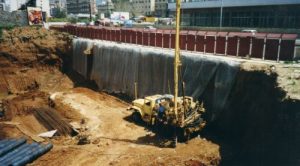 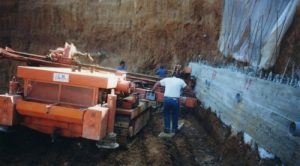